Not Ready for Review: This Page is Under Development!

Showing dialog prompts displaying the same messages over and over again can be annoying for most end-user. Take the security or alert notifications in your browser, most of us just turn them off after we have read them after they have been shown for the first time, we even discard them without reading them in some cases. EiffelStudio another product full of cases where "discardable" dialogs prompts are a necessity, without them we could hinder and annoy end-users.

You should already be familiar with the topics detailed in Using Dialog Prompts (Advanced) as the information there applies to discardable dialogs prompts also.

Before continuing you may also want to check out the following pages:

The Need For Discardable Dialog Prompts 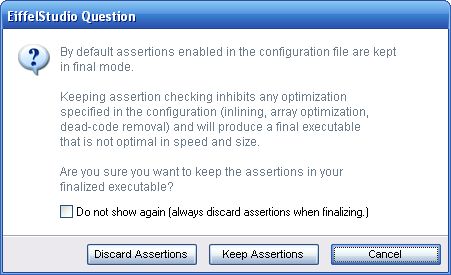 There are, as of EiffelStudio 6.1, three common discardable dialog prompt classes for use which are somewhat self-explanatory.

All dialog prompt classes are based on an abstract implementation ES_DISCARDABLE_PROMPT, which in turn implements parts of ES_PROMPT.

Note: There is no error variant of a discardable dialog prompt because errors are considered too important to discard. If an error occurs it should always been shown to the user!

There are only a couple of few pieces of information required when using a discardable dialog prompt over the non-discardable variant.

Most importantly is the configuration preference that the discardable states is stored. Upon creation of a discardable dialog prompt you will need to supply the full name of a preference, which is typically in the form interface.dialogs.confirm_xxxx where xxxx represents the name of the dialog.

Not only does the preference record the state of a user-opted discard but it also permits the user to reactive the dialog prompt via the preferences tool.

A discard message is an optional message that can be set on the dialog prompt during creation, through the a_discard_message argument.

Note: Discard messages should indicate what action will be performed when discarded. The messages should be terse but clear and formatted without an initial capital letter as it's part of a sentence, not a new one.

In the section detailing discard buttons the example was created without a discard message but passing "" as an argument for parameter a_discard_message of make_standard. The follow example sets a discard message "always save":

Like the regular dialog prompts, discardable dialog prompts can also be extended. For an example of extension inside EiffelStudio, see the ES_DISCARDABLE_COMPILE_SAVE_PROMPT class. Below shows an extended ES_DISCARDABLE_QUESTION_PROMPT class to create a discardable prompt that informs the user about unsaved modifications to one or more classes in the project, prior to a compilation. 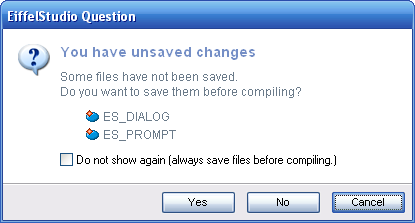